Stagecoach Cambus have finally introduced a carnet style scheme for travel on their buses using their Dayrider or Dayrider Plus tickets. The system is a bit like the London Oyster card, but with some drawbacks.

To begin with you need one of their Smart Cards. If you don't have one already then you can order one for free from Stagecoach by filling in this form (Adobe/PDF, 329KB) and posting(!) it back to them. Once you have your card you can then pre-load it with Dayrider or Dayrider Plus tickets. You do this five tickets at a time the first time you get on a bus.

It's a pretty poor implementation, not least because tickets bought this way expire after three months.

Anyway I wrote about this on Milton News when I discovered it and the same day, 2nd November, I filled in their form and sent it off. Things to note at this stage: the form asks for your name, date of birth (why, I've no idea, I just put "1960" and left it at that), email address and phone number.

So three and a half weeks pass and this morning my card finally arrives back from Cowley Road (less than a mile away). Here it is: 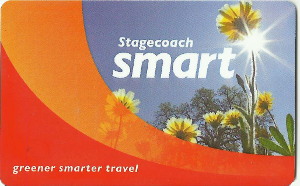 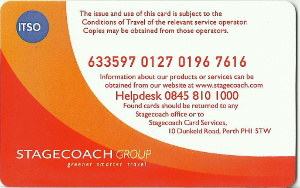 With it came a leaflet explaining how to register online to be able to load the card in advance (you can also do it on the bus on the occasion of your first journey of a carnet).

Here's the leaflet and this is where my jaw hit the floor:

In Step 1 you have to enter the same information again as I'd done on the form. Now they're clearly not comparing this with the data in the form. I know this as the data I gave was slightly different, not least that date of birth. So why the hell did they solicit this data off me on the paper form? I have more than a suspicion that the form is now sitting in a filing cabinet and they've done nothing with the data on it, a belief borne out by the envelope of the letter enclosing the card: my address on the outside was hand written - if they were entering the address data they would surely be printing labels?!

It seems to me that what they should be doing is starting by asking you to enter the card number1 and perhaps your email address and then getting you to confirm your details, plus anything more they wanted?

No, clearly too simple.

Anyway, I did register the card and then, experimentally, I tried to buy a Dayrider carnet ticket and ... I couldn't. They still only sell Megarider tickets online. Looking back at my original post on Milton News I had noted "(they are intending to add the ability to buy tickets online later)". Sigh.