For a while now I've been mulling over a way of getting myself a portable Squeezebox radio. The background to this is that the core of our house media is a Logitech Media Server (aka SlimServer, SqueezeCenter and Squeezebox Server) running on our house server. All our CDs are ripped onto it as MP3s and we can also listen to all of the BBC's radio output, both live and via iPlayer, plus a vast collection of internet radio from around the world.

We have a Squeezebox Classic in the sitting room connected to the HiFi, which is now reduced to an amp, a ChromeCast, a monitor and a pair of speakers as we no longer need a tuner, a recorder of any kind, a CD player or a DVD player.

In the bedroom we've got a Squeezebox Boom (a sort of Squeezebox ghetto blaster, so it's got its own speakers and amp built in but it's main powered only). It also doubles up as our bedside clock and (only occasionally now) our alarm clock.

In our studies, after flirting with a number of software implementations of Squeezeplayers, we now both use squeezelite, which is a headless player which just works.

But that leaves a hole and that's what to do for a portable device.

Now there is, or rather was1, the Logitech Squeezebox Radio which, with the aid of an optional re-chargeable battery pack, did give you some portability. They weren't cheap though. And they were bulky.

My idea of a portable "radio" is that it should be light and I should be able to treat it with a lack of respect (so it needs to be cheap). That's why I like my old £10 FM radio in the kitchen. It just works and the batteries last about a year (it uses four C cells). But it's struggling these days as there's so much RFI about. 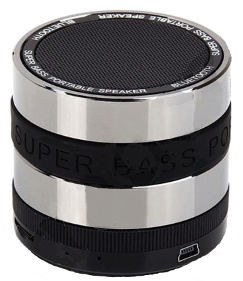 Anyway, back to my quest. I experimented with using my old Motorola Defy phone loaded with the SqueezePlayer app but I found it was flaky.

Which bring me to where I am now. Let me introduce you to my new Squeezebox radio. To give you some idea of scale it's 60mm diameter and 55mm tall. Also, if you look carefully, you can see the mini USB charging socket at the bottom.

So what is it? It's a bluetooth speaker and it's half of the solution. The other half is a Raspberry Pi running squeezelite which is mounted high up on the wall in my study nearest to the hall so that the bluetooth dongle has a good view of the kitchen through the kitchen door with only one wall to get through (especially to the kitchen sink which is where I listen to the radio a lot when washing up) and also a good view to the dining table for when I'm eating supper.

You can control the volume it outputs by rotating the knurled black wheel at the bottom of the device.

That's the only thing you control on the device, everything else you control from the server interface which I can do:

The cost of this? Well the speaker cost me £6.89 on eBay. Bargain. I had the Pi already, ditto the bluetooth dongle, so it's all a bit "parts bin" as far I'm concerned andI'm pretty pleased with it as a version 0.1 however I can see that this likely to be a work in progress for two reasons:

So if this works out and I find I'm using it enough I think I'll be investing in a better quality bluetooth speaker.