Just over six months after I bought and later returned my first Chromebook I'm back on the Google road again, this time with a Dell Chromebook 11" (2014). "Why now? Why that one?" you're asking yourself (well, you're probably not, but whatever, bear with me). 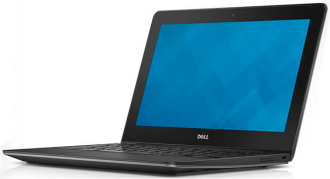 Why now is pretty easy: Christmas is approaching and I've already bought Beth's Christmas present1 so now it was time to think about a present for me. My elderly Acer Aspire One D250 Netbook seems slower and slower and it's now on its fourth keyboard I think so although it's done me pretty damn well since I bought it back in January 2010 I think it's time I had a new compact laptop.

Why a Chromebook rather than a conventional laptop? Well there is a well trodden path for getting Chromebooks running Linux, so I could have a dual boot laptop at a very reasonably price.

I talked in my last post on the previous Chromebook about getting an Asus Chromebook Flip when they came out. They are now out but they use an ARM processor and the general view seems to be that it's a lot easier to put Linux on an Intel processor Chromebook than ARM. Which left me looking around for an 11" screen Chromebook with 4GB of memory (which is the other thing everyone says you want rather than the rather paltry 2GB which a lot of the cheaper ones come with). In the comparative reviews the previous Dell model, the 2014 rather than the 2015, came out very well and it ticked all the boxes on memory and Linux compatibility.

But the final clincher was a trader on eBay who was selling Dell refurbished ones, with three years Dell next day RTB warranty, for £149. So I grabbed one and it arrived yesterday2.

I wasn't well yesterday but I did have a play with it while lying on the sofa nursing my migraine. First thoughts:

Anyway it's early days yet. The next step is a trial install of Linux. So more here later.